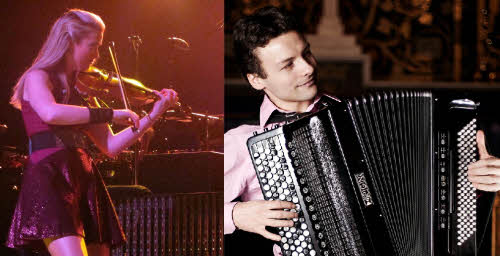 Due to unavoidable circumstances, the programme being presented by Lizzie and Milos has been changed from the original Stravinsky and Chanel theme to a more general musical one. This fabulous duo will now present a programme which takes listeners round the world on a whistle-stop tour, exploring the musical flavours of Argentinian Tango, Romanian Folksong, blue grass toe-tapping tunes, Parisian Impressionism and more. There will be wonderful pieces by Piazolla, Ravel, De Falla and many others for violin, accordion and voice. It promises to be an equally exciting evening from two of Europe’s top musicians, with much variety to appeal to  a wide range of musical tastes and ages.

A prolific performer, Lizzie has been on the international stage for two decades.  The TimesIn December 2018, Lizzie was chosen as one of the top 50 females in the UK by the Daily Mail’s Top 50 of 2018 list. Lizzie’s career has seen her enjoy a world class diverse range of experiences. Highlights include touring internationally for several years with Nigel Kennedy as soloist and Concertmaster of his Orchestra of Life (including directing for him the ‘Palestine Prom’ for the BBC Proms 2013 in the Royal Albert Hall) and appeared with Brian Wilson and Jeff Beck as a featured artist in US-wide tours which gave her rave reviews in every one of the 30 concerts they performed together. Lizzie created and founded Classical Kicks in 2012 in an ongoing mission is to bring classical music to a wider audience in accessible, diverse venues and contexts. In November 2019 Lizzie curated and performed a headline event at Ronnie Scott’s Main House with world renowned choir, The Sixteen and Director Harry Christophers together with pianist James Pearson, accordionist Martynas Levickis, and rapper Isatta Sheriff.

Award-winning Serbian born Miloš Milivojević has been described as “A hurricane of imaginative invention” by Hilary Finch. Miloš is an ambassador for the classical accordion and has premiered works and collaborated with British composers including Anthony Gilbert, Howard Skempton, Elena Firsova, Patrick Nunn and many more. The versatility of Miloš’s playing extends to working with leading opera companies and he is regularly invited to perform with Opera North. In 2014, Miloš was elected an Associate of the Royal Academy of Music (ARAM) for his contribution to music.